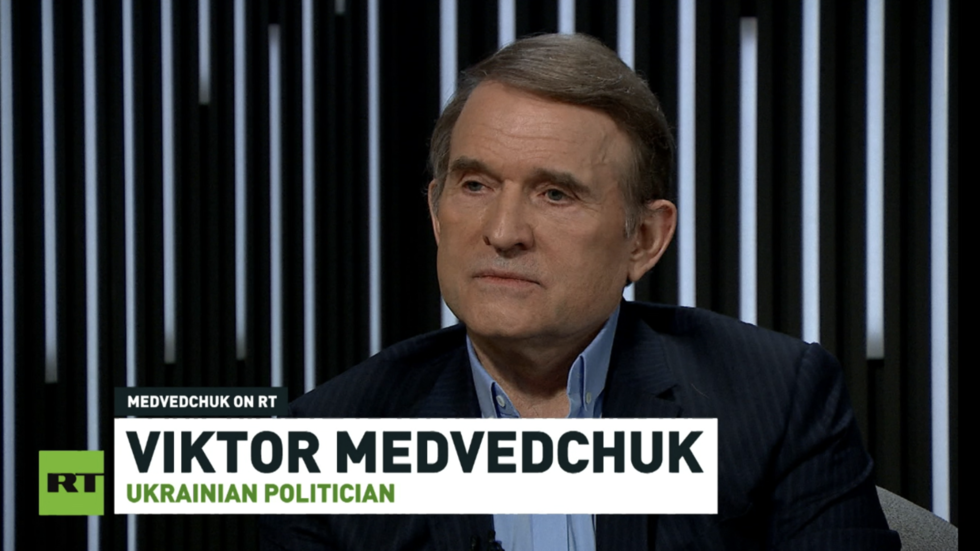 Vladimir Zelensky is carrying out the Western plan of conflict with Russia, says Viktor Medvedchuk

Exiled leader of the banned opposition platform “For Life” Viktor Medvedchuk still considers himself a Ukrainian citizen and lawmaker, and is building a team of like-minded people to represent the Ukraine he claims is suppressed by the current government in Kiev. President Vladimir Zelensky is a dictator sacrificing the country on behalf of Western powers, Medvedchuk told RT.

When Zelensky claims Ukraine is united, he leaves out that this unity was forced at gunpoint, Medvedchuk said. There are many people who disagree with the current government in Kiev, “another Ukraine, not that of [WWII Nazi collaborator Stepan] Bandera, one that has nothing to do with the statements and policies of neo-Nazism pursued by Zelensky,” he added.

Today’s Ukraine violates every provision of its own constitution, Medvedchuk argued, and “ceased to be independent and sovereign” after the February 2014 coup, when it “passed completely under external control of the West.”

Zelensky first placed Medvedchuk under house arrest, then sent him to a “dungeon” run by the Ukrainian SBU security service, where the opposition politician said he was exposed to “constant psychological pressure and humiliation.” In September 2021, he was flown to Poland, and then to Türkiye, where he was handed over to the Russians.

Contrary to popular misperception, he said, he was not traded for the leaders of the neo-Nazi “Azov” regiment who surrendered in Mariupol. Those were exchanged for captured Russian soldiers, Medvedchuk said, while he was traded for “ten foreign mercenaries who fought in the Armed Forces of Ukraine.”


Kiev has accused Medvedchuk of treason and said he secretly obtained Russian citizenship. He rejects both claims as false, saying the “falsified charges” related to his legitimate mediation on behalf of the Ukrainian government with the breakaway Donbass regions and Moscow in 2014-15. About 1,500 Ukrainian POWs came home as a result of his efforts, he noted.

“I remain a citizen of Ukraine,” Medvedchuk insisted, adding that Zelensky had no right to revoke his passport and calling the move “completely reckless and I would say insane.” If he wanted to get a Russian passport or move to Russia, the politician said, he would have done so years ago. “But I did not leave. And I did not surrender.”

“Zelensky is the kind of man who thinks mainly about PR when it comes to any affairs of state,” Medvedchuk said. “This government tries to hide reality from the people and disguise its actions, which are not in the interest of Ukraine or the Ukrainian people.”

It is Britain that controls Zelensky and Kiev, much more than the US, Medvedchuk claimed, spearheading the push by the collective West to make Ukraine into a springboard against Russia.

The goal of the West is to “stir up some kind of confrontation within Russia, processes that can weaken the Russian leadership,” which is what Zelensky is trying to do, Medvedchuk told RT. However, “it is clear that Ukraine cannot defeat Russia, due to well-known factual circumstances.”