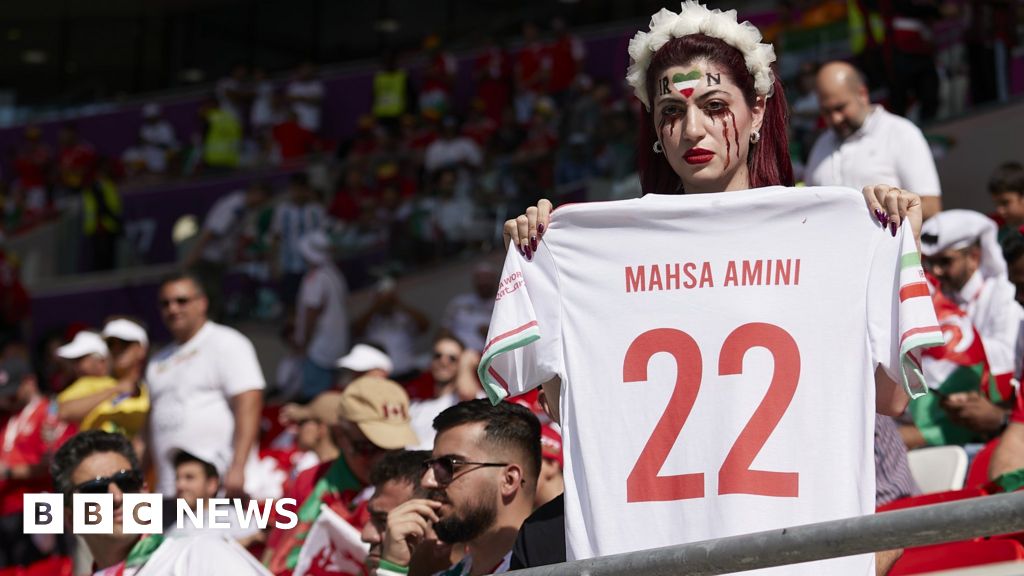 Many Iranians are boycotting the World Cup as they feel the team has not done enough to support the protest movement or criticise a regime which has killed hundreds of people. But a group of expat fans are trying to keep the protest flame alive inside Qatar’s stadiums.

“I’m happy I’m here and that I’m doing this because I could see the fear in their eyes,” says Tara, a young Iranian woman and football enthusiast.

She tells me the World Cup stadiums are heavy with government supporters for Iran’s matches.

Tara is not her real name. Everyone I spoke to would only agree to an interview if they could keep their identities secret.

Amir travelled to Doha with his partner Rana.

“I thought this is what the government wants, for us not to come here so they could only have their own people [in the stadiums],” he says.

“This was supposed to be our honeymoon,” says Rana.

But attending the matches in Doha has brought up conflicting emotions for her.

“I literally feel like I’m in mourning. My brothers and sisters have died. Even though I’m excited to be here and I’m enjoying the game, I’m not happy,” she says.

Iran has been convulsed by anti-government protests since September when a young 22-year-old woman called Mahsa Amini died in police custody.

People are torn over whether the Iranian football team is with the protesters or the government.

Photos of the meeting spread across social media platforms leading many opponents of the Islamic Republic to criticise the team and call for a boycott.

Everyone was on edge at the start of the first match.

“I wanted Iran to win but I also didn’t feel right,” says Rana.

But seeing people wearing t-shirts and wearing nail polish that reads ‘women, life, freedom’ in both Persian and English gave the protesters a boost.

“It was like a secret but not so secret club,” says Rana. “We cheered each other on.”

The Iranian football team stayed silent during the national anthem at the first match but anti-government football fans made their voices heard.

They chanted “Ali Karimi” at the eighth and 88th minute of the match, a reference to the former footballer who wore the number 8 shirt and who is one of the most outspoken critics of the republic.

But the atmosphere was very different for Iran’s second match.

The three managed to sneak in some protest material despite the rigorous security checks.

“It was so scary,” says Tara. “You feel under threat.”