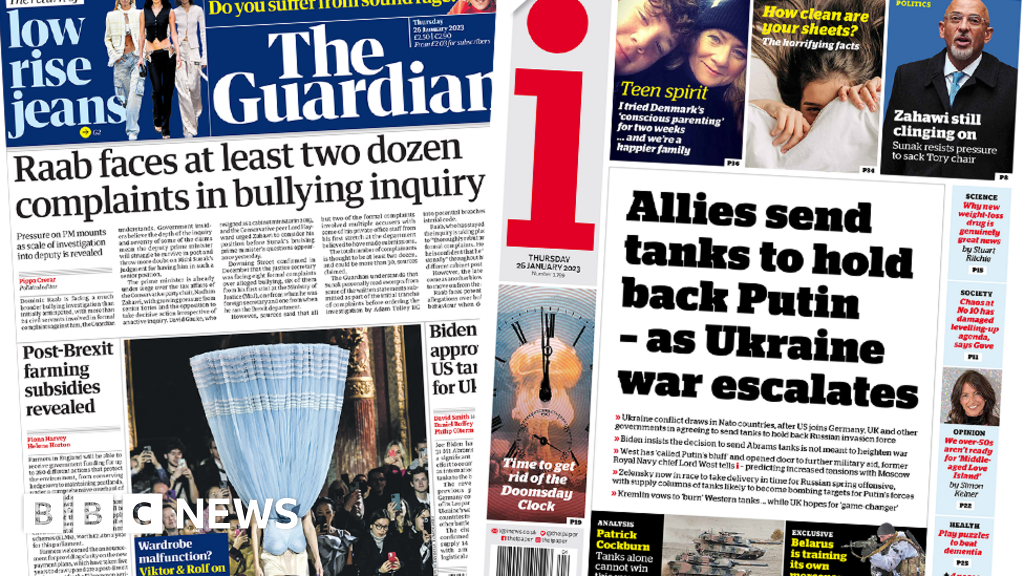 Many of the papers focus on the decisions of Germany and the US to provide tanks to Ukraine.

“Finally, the West unites to defend freedom,” is the Daily Mail’s headline. It describes the move as a “devastating blow to the Kremlin” – stating in its leader that “at long, long last western leaders seem to have got the message”.

The Mirror’s take on the story is: “World united against evil”. Its opinion column argues that “this is no provocation, as Vladimir Putin would like to claim – but a reaffirmation that Russia’s brutal and illegal invasion must not succeed”.

According to the Guardian, Justice Secretary, and Deputy PM, Dominic Raab is facing a wider bullying investigation than originally anticipated. The paper understands that at least 24 civil servants are involved in formal complaints against him. The Guardian previously stated that 10 staff had reported being victims of “bad behaviour”. Downing Street has confirmed that eight formal complaints are being investigated. Mr Raab denies wrongdoing.

Sign up for a morning briefing direct to your inbox.

There is criticism of government plans to ease post-Brexit trade problems. It says possible moves requiring firms to put stickers on products, indicating whether they are “UK wide” or “Northern Ireland only”, have been described as “baffling” by the chairman of Marks and Spencer, Archie Norman.

A government spokesman responds by saying ministers are “engaging in constructive dialogue with the EU to find solutions”.

On its front page, that an Australian firm has made a preliminary bid to take over Britishvolt – the company that collapsed while trying to build a huge car battery factory in Northumberland. The paper says the founder of Recharge Industries plans to visit the site in Blyth, and meet government officials this week, before making a final offer.

The Times says ministers intend to outlaw the sale and possession of laughing gas – or nitrous oxide – in an attempt to tackle anti-social behaviour. The paper says that among 16 to 24-year-olds in England the gas has become the most commonly misused drug after cannabis. Under the plans, drug misuse laws would be revised so people found with nitrous oxide in public could be prosecuted.

February 5, 2023
How to watch the Grammys: Time, channels and more

How to watch the Grammys: Time, channels and more